The Puddle Buckley round


The Puddle Buckley Round

Its 2:45am I've just walked into a lake, I'm upto my neck in the water, the waters cold, and its pitch black. I start swimming. This is the start of an adventure that two weeks previously I didn't even know existed.

'There's a thin line that separates courage from stupidity - and that line is only visible in retrospect. If I'm successful, people will call me brave. If I fail, I will be called foolish. Let me do what I think is right.

On Facebook I see that Martyn Price has shared a link to a website thats detailing a new challenge, 'The Puddle Buckley Round'. A forty-odd mile swim/run challenge in Snowdonia that takes in  16 summits and 4 lakes with no set route. You have to visit each checkpoint in order, the checkpoints are the individual summits and the swim start and finish points, the route you take in between is your own choice.
Over the next couple of days I look at it repeatedly, looking at the website I wonder if its achievable at this time of year.  The key is if I'd be able to swim across the lakes with the water being so cold,  I estimate at least one of the swims will have to be done in the dark and that's obviously not great.

I went out to the Lakes to try out all the gear I'll need for the attempt at the Puddle so late in the year. I've decided to have a go at doing the swimming bits using a drysuit with my running gear underneath, I'll tow all my other gear in a drybag while I swim. Once each swim is over, I'll roll the drysuit and drybag up and carry them in a 32ltr Omm rucksack along with spare clothes, waterproofs, bivvy bag, headtorches and food. Altogether its quite heavy.
I swam across Crummock water then packed the drysuit away and headed up Mellbreak and across the tops from Starling Dodd to Scarth gap then descended to Buttermere, put the drysuit on and swim across. When I took the drysuit off it had leaked and my clothes were damp. I wasn't sure why but then the drysuit is fairly old! I headed over Rannerdale Knotts back to Crummock Water.
In total I did 15 miles with 4'500ft ascent and it was decision made: When i got home that night i asked Angela if she fancied going to Wales for a couple of days the following week!
My original plan was to go to the Cairngorms but Angela had an appointment at Newcastle hospital on the Tuesday so I was now limited to a 48 hour get away. I then planned to go to Glen Nevis and have a go at the Tranters Round. On looking at the weather forecast Wales was looking better than Scotland, decision made I guess!

I was at work, rang Angela and we decided to go to Wales, (she wasn't to ask twice!), taking Zack with us. Before I got home from work, all the accommodation and activities had been booked, while I ran they would go to Zip World. I got a map of Snowdonia and sat down with a highlighter and drew my route onto the map. Looking at the GPX route on the website it said it was about forty miles, But a lot of the lines were direct so I knew it would probably be further. At the pace I had gone the previous day I estimated the Puddle Buckley would take twenty hours or so.

The weather forecast is for it to be a dry, cloudy day with gale force winds developing later in the afternoon. We get up at 2am and go to the start, this is officially the large sword at the edge of Llyn Padarn in Llanberis.  But you can start anywhere on the route as long as you do the full loop.
I chose to start at Gorsaf Ddu car park which is just across the lake, that way I can do the swim across Llyn Padarn first.
I walk into the water its pitch black there's no moonlight, The waters cold, I start swimming, its the first time I've swam at night. While I'm swimming across I can see Angela pull up in the car park on the other side of the lake, I can now see to where I need to swim.  I'm also wearing a head torch so Angela can see where I am. Considering its the end of October,  the water is cold but its not actually that bad. Once I got out of the lake and changed Angela and Zack then went back to bed and I headed out of Llanberis.

There are five summits on this leg, straight out of Llanberis you head up Moel Eilio and across another two hills to Snowdon the highest point of the round. The first three summits are quite rounded and grassy and are similar to the Dodds on the Helvellyn range. It started raining and the cloud was down, on the top of Snowdon the mist reflected in the light of my head torch made it hard to see where I was going - It was fairly grim. I descended to Cribau Tregelan then down the ridge to Cwn Llan where it started to get light and I could see where I was going. Much better.
The start of the swim is at Elephant Rock at the side of Llyn Gwynant so it was dry suit on, rucksack packed into drybag and across the lake.

This leg is the shortest leg with only two summits: Carnedd Cribau and Carnedd Moel Siabod.
Over Carnedd Cribau there seemed to be a few different trods and route choices, the cloud cleared over Moel Siabod, after i reached the summit i knew the shortest route down to Llyn Mymbyr was pathless and direct. This made it really enjoyable, just running downhill trying to find the best line.
I could see down to the corner of the forest where I needed to access the lake. The swim across was okay but cold; it was easy to see where to get out by some boulders and a wall heading up to the road. but getting from the lake to the path was very overgrown. Taking my drysuit off I realised I was cold - the suit had let in water and I was soaking. I was carrying spare clothes but decided just to pack the suit away and get moving instead of getting changed.

On this leg you head up the valley and then turn onto Pen yr Helgi Du where you follow a grassy ridge to the summit; a narrow ridge then links this to Carnedd Llewellyn. As forecast the wind was now gusting to about forty miles per hour but the cloud had lifted and the views were impressive. I followed the ridges to the summits and after summiting Carnedd Dafydd I rang Angela and arranged to meet her after the next swim at the bottom of Tryfan. Daylight was now fading and it would get dark shortly after I finished that particular swim. The next leg is the most technical and with it being windy and getting dark, I knew that if I was wet after the next swim I would struggle to get warm. I could change into my spare clothes but that would then mean I wouldn't have any spare dry clothes for the last leg.
After the summit of Pen yr Ole Wen it was a steep descent on a path which was mainly loose rock down into the Ogwen valley. On arriving at the side of Llyn Ogwen I could see Angela & Zack across the lake, that gave me a lift. Drysuit on and into the water, it was quite choppy and I was swimming into the wind, this was the only time I wasn't happy in the water. I don't know what the temperature of the water was but it hurt everytime a wave went in my face.
Getting out I got to the van and took the 'drysuit' off, I was completely soaked. I took my time, got out of my wet clothes, left my swimming stuff, and packed everything I needed for the next leg into a race vest, then set off on the last leg.

Tryfan in the dark was quite an experience, The scramble up to the summit was good but I had a bit of difficulty getting off the summit. It was now pitch black and the light off my headtorch was reflecting off the mist, which made route finding quite hard. There are some big drops either side of the route down and I was careful to make sure I was scrambling down in the right direction. After descending Tryfan the route goes over the  Glyders to Y Garn, ascends Glyder Fach by the path alongside Bristly Ridge. Its technical terrain, especially in the clag and no moonlight! it was slow going but enjoyable, there's something about running over mountains at night on your own that I like. After loosing height dropping off the summit of Y Garn I was now out of the clouds.
The last summit on the round is Elidir Fach. When I started descending my phone went and it was Ange saying that she could see a headtorch and asking if it was it me - She was waiting in Llanberris. I texted back confirming it was and I wouldn't be long - I just had get through the slate mine and I would be at the finish. Trying to descend through the old mine workings was a bit harder than anticipated - it was like a maze!
I got down and finished in the car park next to Llyn Padarn where I'd started just under 22 hours earlier. In total I'd done 46 miles with 15'700ft of ascent.

The route is pretty good. In my opinion it's a tougher day out than the Frog Graham round, but I think it will definitely become as popular. I really like how inclusive these Swim-run challenges are, there is no time limit and if you need to use a support crew to complete it you can. The level of support you use is completely your own choice, if you want to go solo or if you want to have a day out with people it's up to you, either way its an adventure. 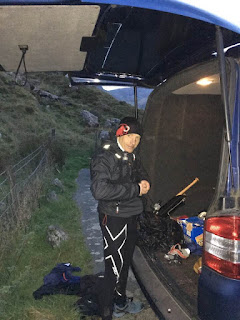